Secured You
Home How to Android How to Hack PUBG Mobile 2019/2020 (Aimbot, Wallhack, Cheat Codes)

PUBG also was known as Player Unknown’s Battleground is an online multiplayer game developed by PUBG Corporation, with the help of a South Korean video game company Bluehole. This game is currently very popular and is available for every platform including mobile phones (IOS & Android). This first-person shooting and killing game can be hacked easily and you can shoot down all of your enemies without ever getting knocked down. This guide will reveal all of the unrevealed Hacks & Cheats of PUBG Mobile alongside telling you how to actually hack it as well!

So, you are a PUBG player and you always want to see and enjoy watching “WINNER WINNER CHICKEN DINNER” flashing on your mobile screen but you don’t get to see it sometimes. Then let me tell you that after this guide you will be seeing that all the time as you hit that big yellow Play button. You must have heard this phrase that “Winner’s never cheated!” but sometimes it is fun to cheat.

The list of all of the Hacks and Cheats for PUBG Mobile is given below:

As we all know that PUBG is a game which can only be played online, the online games have the servers working in the background. The server of PUBG Mobile is highly secured and cheat proof that’s why some of the players have installed the hack version of the game.

In this hack version, the programs or codes of the game are altered and these new codes are then embedded into the game and then that game is encrypted in an APK mod (for Android users) or IPA mod (for IOS users) that is available in several websites. They are very easy to download and to install in your mobile devices (make sure you have allowed your device to install from unknown sources) and for Apple users there Iphone’s should be a jailbreak.

This hacking technique is also in the form of a mod. In this mode, your player will automatically aim and shoot for you by just holding a single button. This hack consists of the code which has been modified to correctly auto-aim the other enemy players for you so you can shoot them down with a single fire.

Aimbots are easily detected by the anti-hack programs available in the game server so you should be cautious to use this Mod. So you should use the aimbots carefully. I have listed some tips that will help you to get rid of getting caught: 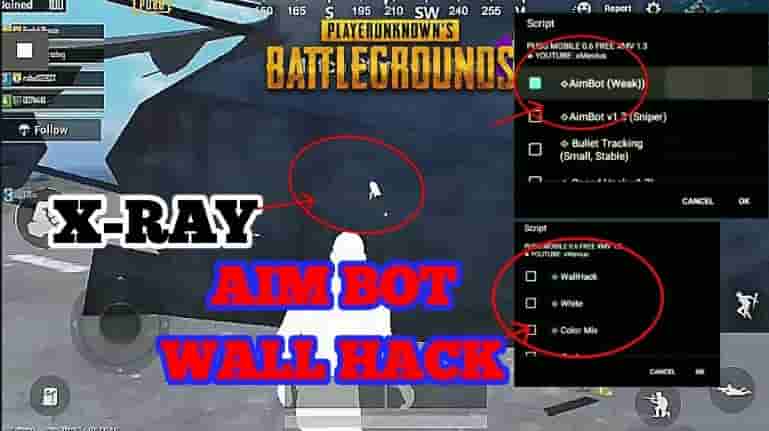 Wall Hack is a hack which also works like an aimbot, this Mod scans the whole map and search for the objects available in the game with the help of this MOD you can look through walls too. After this MOD has stopped scanning for objects, those objects are then highlighted on your screen so you don’t have to look for them.

Wallhack also gives you the advantage to show you the items in the supply boxes that are dropped from the sky so it means you no longer have to scan those houses.

As you know that the Battle Points (BP) are the in-game currency that your player earns due to various winning campaigns. These points are used to buy various crates containing costumes.

You can use the AFK mode for getting battle points in the game. With the help of AFK, many hackers have created a Bot that can make battle points for you. There are many codes and versions available on the internet. You just have to write the code to move your player for some time or keep your player safe within the game zone. Once you win the game by becoming the only surviving person in the game then you will receive the Battle Points (BP) collected by your bot. This AFK mode is also known as Battle Points Farming Bot

But still this cheat can be detected by the game’s server but if you increase the speed by a fraction then there are chances that you might not get caught by the anti-cheat detector in the game. This process is really simple first of all you have to expose the code of PUBG then change the values of presets to depart the packets, plus sending the packets faster than expected.

You just have to be careful if you use this hacking technique but try not to get yourself banned out of the game.

Some of the cheating methods mentioned above or else then those might not work in the PUBG Mobile (e.g speed hack, super jump, spawning items etc) that come usually in different game mods.

But this mod will work correctly in your mobile devices and this mod will provide you a huge amount of in-game cash and battle points. And there are more excellent features of this mod that help you to win the game without doing much hard work. This mod also has the features that are mentioned and explained above.

This mod is not easily detected by the game server but still, you should be cautious while you use it. As you know that no one knows what can happen in the very next moment. Plus the Bluehole company is making it server more secure day by day.

Macros and scripts are not basically any hack or cheat, but it can help you in setting up the automatic tabs and automatic actions. Scripts are basically used to automatically shoot, loot while firing your enemies, heal automatically, use energy drinks while your player is in action, reload while firing and much more. But scripts are very difficult to be implemented on mobile, but the apps for these techniques are been created rapidly.

As we have discussed all of the hacking mods that you can install and enjoy winning the game always. But wait for a second, what if these mods are deleted from the internet. Well, you shouldn’t be worried at all because there are some hacking tools or cheat engines available on the internet to hack the game.

If you use the simple hacking tools (e.g Lucky Patcher, freedom APK, Gameguardian, and others) on PUBG Mobile it can get dangerous for you. There is only one safe way to hack PUBG Mobile using hacking tools and that safe way is to install a stealth app created by Gameguardian on Android, which is probably impossible to be detected by game servers.

But still, it is very risky to use the hack tool that’s why you should be careful because of the game server which contains anti-cheat code.

Also read: How to DDoS Like a Professional Hacker: The Definitive Guide (2020).

Disclaimer: This page is only for educational and informational purposes. Please use the following methods and tricks at your own risk. Visit PUBG’s official site for more information.

New Update: PUBG mobile cheat codes have been updated to fix some issues with hacks not working while in the background, Enjoy!

This has been a long time coming for our players. There is a totally new and fresh hack developed that makes you invisible in the game and still play with other players. It gives you various advantages to win a match as the opponent cannot see where you are as you are fully hidden.

To activate this hack:

If it doesn’t work try relaunching the game, turning the phone off and try again. Please do leave me feedback below on this invisible hack for PUBG.

Many of the readers have reported that there are various sites out there that have uploaded fake generators for increasing your Battle Points or having Unlimited UC. These are malicious and can infect your phone, so please stay away from such sources and apps.

PUBG Mobile has released the 2nd Anniversary update this update brings many new features including:

Arctic Mode: This mode involves the Vikendi map where players have to survive in cold temperatures and keep the body temperatures of their players down. The unlimited health hack should help you win most of the games in Arctic Mode.

Death Replay: This is a death camera where you can see how the enemy killed you. A great addition which will reduce the number of hackers.

Colorblind Mode: A mode has been added to help people who may suffer from color blindness. This setting can be changed in “Graphics Settings”.

Arcade Mode (Return of Hardcore): This is a true hardcore mode that brings the true survival and tactics out of a player. It removes various sounds from the game such as the sound of opening and closing the door.

New DBS Shotgun (AirDrop only): A totally new weapon has been released in the game which can eliminate an enemy with a single shot. This weapon can only be found in an AirDrop. There may be a hack developed to give you the DBS shotgun automatically without having to wait for an AirDrop.

Royale Pass Season 12: The new Royale Pass was released which includes bonuses for those players who have never bought a season pass before.

Amusement Park Mode: While you are waiting for all the players to join you can explore various amusement parks that have arcade machines. You can use your Tokens found in the game to play.

PUBG Mobile Season 14: This update is bringing Royale Pass 13 along with other goodies such as their own Unknown Cash. It will also come with a Pineapple Prince Ornament. Along with this, they are also releasing the Fire Ranger set too.

An all-new Toy-themed battle pass is arriving which will feature YT Ultimate Shooter or ICE rangers, these can be unlocked after reaching level 50. Be ready for a lot of other character skins too.

I know it is very difficult for you to search for all of these hacks singularly that’s why I am attaching a download link that contains all of the hacking techniques that I mentioned above. There are some extra hacks that I didn’t explain in the above explanations so go and check them out. I hope you have enjoyed reading our guide on How to Hack PUBG Mobile 2019/2020. You will also need to have downloaded a special APK file for Android or IPA file for iPhone.

So, that was all for now but I should really warn you that the game creators have very strict rules and regulations which you have to follow while you play the game. The anti-cheat server that is available in the game is always keeping an eye over every game player and it is very difficult to hack the game without getting caught. A piece of news came out a few days ago that about 142 numbers of players have been arrested in case of hacking PUBG Mobile. So be careful who knows you might be the next person behind the bars.

Update: APK file has been updated with new files. Major improvements and fixes have been added in 2020 upgraded APK.

How to Easily Make a Keyboard Macro in Windows 10 (Guide)

What Actually Happens When System Restore Interrupts / Stucks in Windows 10