All of the products which are available in OpenVAS are free, and most of the components of this particular software are licensed by the GPL (GNU General Public License). Most of the plugins of the OpenVAS software are written in the NASL (Nessus Attack Scripting Language).

How OpenVAS was made

OpenVAS was started with the name of the GNessUs; its source code was copied from the Previous Open source scanning tool named Nessus after the developers of this software named Tenable Network Security changed its proprietary to the closed source in October in the year of 2005. The OpenVAS was initially introduced at the SecuritySpace at pentesters; it was genuinely discussed with the pentesters at the place of Portcullis Computer Security and then it was declared by on Slashdot by the Tim Brown himself.

OpenVAS is also a member of the project of (SPI) (Software in the Public Interest, Inc.). In the year 2006, several more source codes of the software named Nessus were copied into the newest version or update of the OpenVAS as the open-source solution. These copied programs are called the forks, and these programs are copied from any other software. Now after getting registered as the Software in the Public Interest, Inc., the OpenVAS now owns the domain which is “openvas.org.”

In 2008, a company based in Osnabrück, Germany which was named “Greenbone Networks GmbH” its primary purpose was to push forward the vulnerability scanner of OpenVAS.

The Greenbone has three foundations based on its business:

The Structure of OpenVAS

Now there is a whole structure of the OpenVAS which is given below: 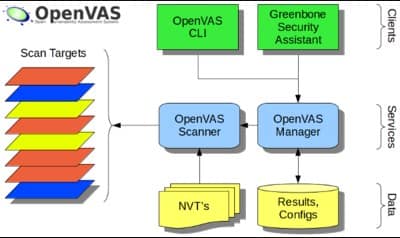 As we have discussed that the Vulnerability scanning is a very deciding or crucial phase of having a fully updated vulnerability scanner and the best penetration tester in the kit of your security tools. It can also make a whole lot of difference by helping the user scanned or discovered with all of the overlooked vulnerable items. Because of the following reason, the Kali Linux has packed the latest and all of the newly released OpenVAS libraries, and tools are included within Kali Linux. The Kali hasn’t changed the significant things in the release of this version and also in terms of running the vulnerability scanning software.

How to Install and use OpenVAS

After that, you have to create an admin user, start up the various services and then download the latest rules. All of these settings can depend upon the speed of your internet connection and all other computer services, due to which it can take a lot of while if required.

[1] The script below helps synchronize an NVT collection with the ‘OpenVAS NVT Feed’.

When the process of the OpenVAS-setup is completed all of its processes then all of the following services such as OpenVAS GSAD, scanner, and manager all of these services should be listening to the following things:

Now you can simply start all of the services once you have configured the installed version of your OpenVAS. You can start these necessary services by just simply running the openvas-start file.

Note: If you are facing any issues regarding the OpenVAS then you can simply troubleshoot all of these problems with the help of the openvas-check-setup to identify any sort of problems or errors and troubleshoot it using this simple built-in service.

How OpenVAS Checks for Vulnerabilities

This point depends upon the goals of the user and the target which is being tested. You will have to open an IP Address or even a whole length or range of IP Addresses (this option requires the Pro membership of the OpenVAS) or even the hostname. You can also enter a whole list of different targets to run as a single job or even as the separate jobs for a consolidated or centralized report.

There are several multiple options of the scan type available for the users who want to perform the scan. Each scan type has its own functionalities and services. 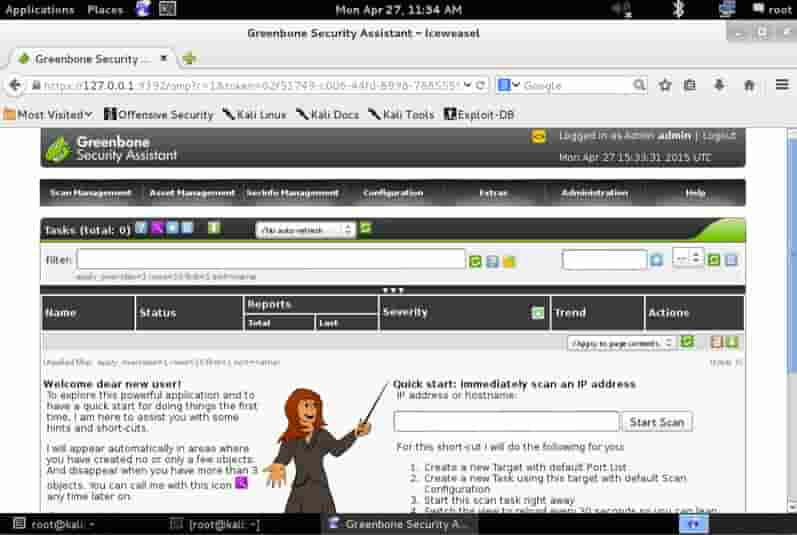 Now we are going to learn about the connection of the OpenVAS via a web interface. Now you can do this with the help of inputting the following web address in your web browser: https://127.0.0.1:9392

Once it has accepted the self-signed credentials, SSL certificate and plugin the credentials for the users or admins. These passwords of the admin can be generated during the setup phase.

That was all of the configuration required for the setting of the OpenVAS using Kali Linux, and now you are ready to run a scan against the required or given the range. 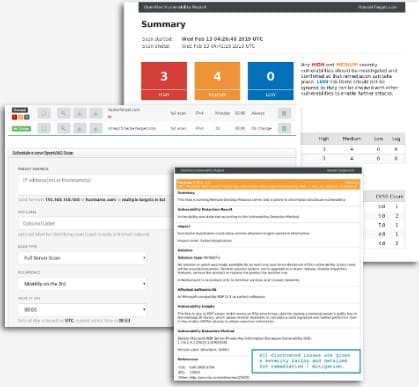 In this guide, we talked about the vulnerability scanning software named OpenVAS Free Download. It is excellent and efficient software when it comes to the scanning of the vulnerabilities against the different networks. We also discussed the brief history of this software, and after that, we also learned the working of OpenVAS.

Then we discussed all of the scans types according to their advantages and uses. Then we also examined the Web interface of OpenVAS due to which you can perform the scanning of vulnerabilities over the web.