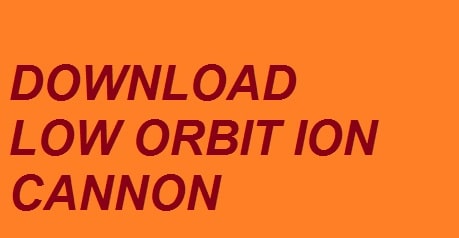 Low Orbit Ion Cannon also knew as LOIC Free Download, is a tool. It is used to launch Dos and DDoS attacks. The small orbit cannon was initially developed by praetox technology. It is a network stress testing application, but now it is used with malicious intent as it has become open-source. It is a very user-friendly tool that is easily accessible. It has gained a lot of fame because of its use by the members of the hacktivist group anonymous as well as the users of the 4Chan forums.

The best thing about Low Orbit Ion Cannon Download is that it lets it’s users to launch the DDoS attacks with very little and basic technical knowledge. The tool is available for download and has a simple point and click interface. The users, however, with the help of web browsers such as Javascript version called JS LOIC and web version called the low orbit web cannon, can launch the attacks.

The low orbit ion cannon tool is used as political cyber-terrorist attacks against the larger capitalist organizations. Its hive mind version provides the average non-technical users a way to give their bandwidth with an idea of supporting a cause to which they agree with. It’s a DDoS booter software used to DDoS targets.

The LOIC is the top security project of Git Hub. It can be downloaded for free. In the project, there has been a total of 256 commits that were done in 3 branches with 31 releases by six different contributors. The project is named as Low orbit ion cannon by its community.

How to use Low Orbit Ion Cannon for DDoS 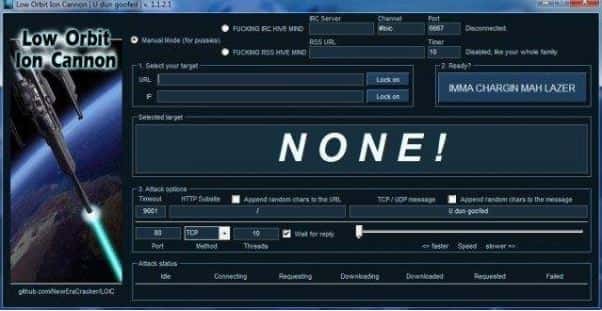 The low orbit ion cannon is a straightforward and accessible tool. For this, you need to fill in the URL or the IP address of the particular system. Select the attack method then port and press the big button that says, “IMMA CHARGIN MAH LAZER.”

Follow the steps to use Low Orbit Ion Cannon (LOIC)

For now, you have mounted an attack on the target that is great!! In the tool, you can see the status of the attack (that is the number of packets sent)

It is important to remind here that use this tool very carefully. It is illegal to carry out DoS or DDoS attacks in most countries; however, using this tool is no exception. You can use it to test different networks; you have permission to test and demonstrate the power of DoS attacks.

You need an extensive network of users to get full leverage, that attacks the same target at the same time which becomes a very useful DoS attack (as seen by the anonymous attacks on PayPal, Master Card and many more)

Now, all of these services with a fundamental goal that is disrupting service. An attacker using low orbit ion cannon is not able to generate much junk traffic to make any serious impact on a target. For dangerous attacks to occur, you require thousands of users to coordinate a simultaneous attack on the same goal.

Users, however, to make these coordinated attacks easier can make use of IRC chat channels to run a “hive mind” version of low orbit ion cannon which lets the user master user control several networked slave computers by creating a voluntary botnet. Thus is a poplar approach as owners of the slave devices may claim that they were innocent victims of an involuntary botnet.

The low orbit ion cannon was used in 2008 by anonymous to attack the church of Scientology websites in response to the legal efforts made by the church to take down the Youtube videos. LOIC was also used in 2010 when the supporters of wiki Leaks went after the sites of Visa and Master card in response to the credit card companies freezing payments to Wiki Leaks.

How to Stop and Defend Against LOIC Attacks

The smaller attacks of LOIC HHTP are usually mitigated with a local firewall by having a server administrator to look at the logs identify the IP’s of all the attackers and also dropping down their requests. This strategy, however, is not able to stand against large scale and high attacks in which hundreds or even thousands of various attackers are working in tandem.

Moreover, the local firewalls are also not able to provide security and protection against the TCP or UDP floods, the latter of which can even target and disrupt a firewall. The WAF that is the Web Application Firewall can protect against the HTTP floods, and thus the dedicated DDoS protection can also stop the TCP and UDP attacks.

Famous DDoS Attacks of all time caused by LOIC

The notable DDoS attacks of all time are as followed:

Disclaimer: Please use this software on systems/networks you have permission to do so only.

Update: A new build has been released to prevent antivirus programs from marking it as a harmful tool.

We have discussed with you regarding the Low Orbit Ion Cannon (LOIC) Virus Free Download like how it can be used and how the attack can be stopped. You can download LOIC the tool, and source code from the links provided. If you found this article useful enough, then comment down in the section below.

Note: The file below is virus-free and safe to install.